How To Publish with Backend Controller and Models in Joomla

While the majority of the request going to Joomla end up displaying a view, this is not the case for all of them. When records are published from a backend list screen, a controller task is called to do the publishing. To handle publishing in backend tasks Joomla has specially coded controllers and models.

Read more: How To Publish with Backend Controller and Models in Joomla

How To Add Backend Toolbars in Joomla

Every backend view in Joomla has control over the toolbar area appearing just above the main output. This toolbar is controlled through some helper functions that make it impossible to mess up.

Read more: How To Add Backend Toolbars in Joomla

The most typical type of screen seen in the backend of Joomla is one that lists all the records in a table making them available for editing. Let's start off the backend of the Noida City component, with a list of all the places in the database.

Read more: How To List Database Records in Joomla Backend

Difference Between Frontend and Backend MVC 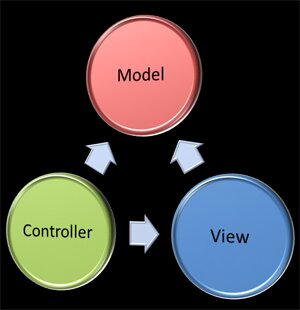 Despite doing slightly different things, both the frontend and the backend of Joomla use the Model View Controller design pattern for organizing code. The biggest difference is that the frontend is primarily used for displaying data while the backend is used for managing it.

How To Override Custom Component Views 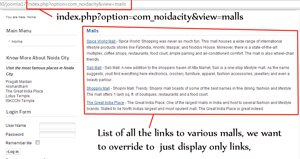 One of Joomla's strongest features is the ability to override practically all the HTML output at the template level without modifying the original code. Views and custom components are no exception. Let's test a view override. This will be override for our Malls view and it's going to remove the descriptions in the links that are currently on there and just replace them with links and paragraph tags.